A tale of intrigue, madness, and redemption 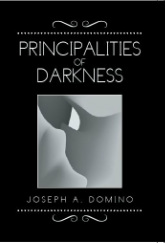 by Joseph A. Domino
Is it twenty-first century hysteria?
Or has the Apocalypse finally arrived?
Dave Harrigan follows a trail of delusion and dementia­--
but ultimately finds he must confront the demons within.
A number of local ministers suffer psychotic episodes in a sleepy rural stretch of south Delaware. The incidents are random, striking across all denominational lines, but too frequent for coincidence. In one stricken town named Harrington, the Progressive Church of the Millennium, led by self-proclaimed visionary Reverend Arthur Moley, claims that the incidents are God’s punishment to  churches gone astray. Consequently, many of the local faithful flock to the PCM. Is it divine wrath or a scam? Computer specialist David Harrigan will uncover the truth. CLICK on image to order from Amazon.
From the book:
"Daring" Darla Doxbury felt a tightening in her chest as she  quietly scrambled down the fire escape. Daring is what her friends would have
called her if they could see her now. Darla convinced herself she was doing the right thing; her only apprehension lay in being caught. There was a glint of the  full moon in her eye on this unusually hot April evening. Earlier there had been  thunderstorms, lightning, gusts of hail, and a queer red sky. Although it had  cleared, a balmy and sodden hush lingered. The ends of her long straight blond  hair were dripping wet and plastered to the back of her neck."

Reader comment: "A spine-tingling page-turner, complete with characters the reader cares about. Doses of dark unsettling intrigue as well as dark, twisted humor. You won't believe the scene in the hospital ER. The bad guys get their just rewards in an abrupt ending, but the main character, Dave Harrigan, survives his tribulations and conquers his inner demons to find peace -- retired schoolteacher."

About the Author...
Joseph A. Domino was a college instructor from 2007 through 2013 before taking a year off--kind of an informal sabbatical. He returned in January, 2015 for two more courses, but now is officially retired. He is considering a return for a course this coming summer or fall.

Prior to that he spent 30 years in the technical publications field. During that period he produced two other full-length novels (A Reign  of Peace and Downtime, also available at Xlibris and Amazon), as well as a novella and  dozens of short stories, articles, book reviews, and blogs which have appeared  in a variety of print and online publications. Also available at Xlibris and Amazon:

A Reign of Peace (Joseph A. Domino and Nicholas F. Cucolo) is an adventure epic where characters engage in larger than life heroics to preserve a distant yet familiar civilization. It focuses on  a young man named Dominus and his struggle with faith as he confronts threats of  war and conquest.

In turning over the soil for the next crop, two hapless farmers  unearth a small metallic box—about the size and shape of a pocket calculator. To  their amazement, it hums and has a small translucent window with an eerie  pulsating green glow. The community buzzes with excitement. News of the strange  artifact reaches Dominus and his close friend, Rumanion, farmers who have also  studied history and archaeology at the University. They decide to have a look at  this unique relic. Before they realize what happens, they are caught up in a series of events which forever alters their lives and their society as well.  Memorable life-like characters struggle in a unique setting and, as a result of  their conflicts, mature as they learn more about themselves and the world around  them.
CLICK on image to order from Amazon.

Downtime (Joseph A. Domino). Groucho Marx has said, “I wouldn’t belong to any club that would  have me as a member,” essentially the protagonist’s credo at the outset of  Downtime. Downtime is a layman’s vision of the approaching  apocalypse. This dark comic tale is seen through the eyes of hapless Melford  Blintze, a literate, sensitive, and timid man who is tormented by private  insecurities and the excesses of a vulgar society going to hell. Blintze doesn’t  believe the end is near; he believes that it’s in progress.

The setting of the novel is  a near future. Terrorists have taken  over an ICBM missile base. During this crisis, oddly kept at an emotional  distance by Mel’s urban society, Mel is unwittingly involved in a mad terrorist  plot by his crazed economics professor. As the tension of approaching Doomsday  mounts, Mary, an attractive Washington agent, rescues Mel not only from the  terrorists, but also from his lack of  self-respect.
CLICK on image to order from Amazon.
Powered by